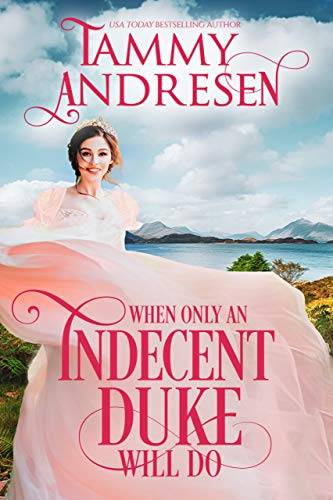 He’s not the marrying kind…

The Duke of Rathmore is not the sort of man to indulge in a happily ever after. Chase gave up on love, and even affection, a long time ago. He spends his days managing his dukedom and his nights in far less wholesome pleasures. Which is why he can’t believe his luck when a spring storm lands him on the doorstep of the Moorish family. The Honorable Thomas Moorish has five stunning daughters, each more delectable than the last. And most beautiful of all, the eldest, Miss Ophelia.

She’s certain love is the answer…

After the death of her mother, Ophelia has spent much of her youth helping to raise her four younger sisters. At nearly two and twenty, she’s yet to have a season or even any romance of her own. But what she’s lacked in real life excitement, Ophelia’s imagined through the pages of all her favorite books. And when a handsome duke lands on her door, she’s certain this is her chance for a real-life fairytale. Except after their magical first kiss, everything goes wrong. She knows the plot and he isn’t following it. Instead of asking for her hand, Rathmore gives her a polite but cold, thank you. And rather than professing his love, he announces he’ll leave first thing the next morning. The man’s not her prince at all but a complete rogue.

Ophelia’s tempted to give up romancing this rake. But he hints at a past filled with so much hurt, she’s certain if she broke through that hard heart, she’d find a man in desperate need of her affection.