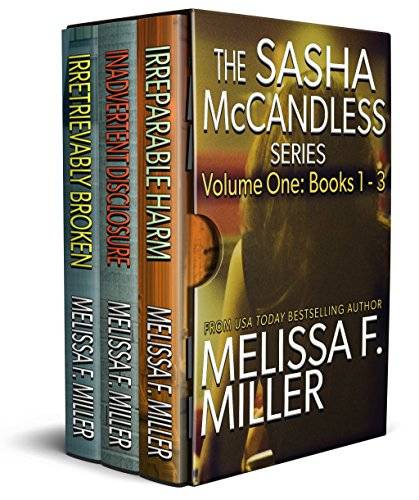 After eight long years, Sasha McCandless is about to make partner at a prestigious law firm. When a plane operated by her client slams into the side of a mountain, killing everyone aboard, Sasha gears up to defend the inevitable civil lawsuits. She soon realizes the crash was no accident: a developer has created an application that can control a commercial plane's onboard computer from a smartphone. Sasha joins forces with a federal air marshal, and they race to prevent another airline disaster. But when people close to the matter start turning up dead, Sasha must rely on both her legal skills and her Krav Maga training to stop the madman before he kills her.

Six months after an airplane crash altered the course of Sasha's professional and personal life, she's focused on building her solo law practice and tending her budding relationship with federal air marshal Leo Connelly, who helped her stop a madman. When she drives from Pittsburgh to rural Clear Brook County to argue a discovery motion, she finds a town bitterly divided over the issue of hydrofracking the Marcellus Shale. Outsiders from the oil and gas industry and environmental activists threaten to rip apart the community's fabric. Then the town's only judge is murdered, and Sasha can't just walk away. As she works to find the killer, she must race to save the town before it fractures beyond repair.

The venerable law firm of Prescott & Talbott is reeling from the murder of partner Ellen Mortenson -- purportedly at the hands of her estranged husband -- when a photograph of the dead woman arrives, her face Xed out and "ONE DOWN" scrawled across the bottom. Within days, a second partner is murdered, her husband also accused. Sasha doesn't practice criminal defense, so she's suspicious when her former firm asks her to represent Ellen's husband. Owing Prescott a favor, she takes the case and soon finds herself representing not one, but both, of the so-called Lady Lawyer Killers. The long hours jeopardize her relationship with Leo Connelly when he needs her most. That's the least of Sasha's troubles, though, because what she doesn't know is that the real killer is waging a vendetta for a past case gone wrong. And there's one more lawyer on his list.
Legal Thrillers Mystery Series