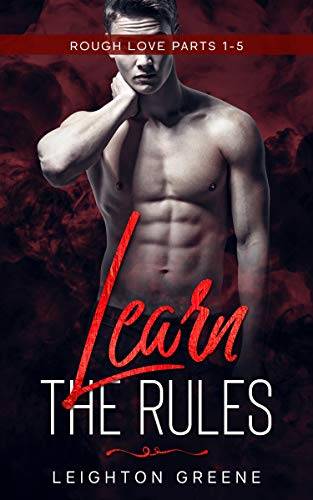 Learn the Rules contains the first five parts of the Rough Love series, collected in one book for the first time.

1. Bound by Him
Benjamin Ballard always assumed he was straight - in every way possible. They invented the term 'vanilla' to describe him. But if Ben's so straight, why can't he get his inscrutable coffee-shop co-worker Xander Romano out of his head? And how come Xander's rough-housing on the basketball court gets Ben so flustered?

2. Taken by Him
Xander knows the games he likes to play can have unexpected consequences…but he thought he had everything under control. Sure, Ben’s constant questions get on his last nerve sometimes, but Xander knows he means well. Ben’s just new to the world of kink. Exploring. Experimenting.

That’s all it is, Xander’s sure.

And then one day, everything blows up in his face.

3. Dared by Him
Xander Romano's career is looking up, and his personal life is too, for once. But when a figure from his past shows up at a party, how will it affect what he and Ben have been building together?

4. Marked by Him
Ben Ballard doesn't believe any scene with Xander could get truly scary. He knows Xander, and he knows Xander would never really hurt him. Xander might play at being the Big Bad Wolf, but underneath, he's a big softie.

Find out what happens when Xander blows the house down...

5. Loved by Him
Ben Ballard has found his balance again after a difficult few days. Even better, he knows he has a boyfriend who loves him, a career that's finally starting to go places, and a family that accepts him for who he is.

The only problem? Said boyfriend, Xander Romano, has to move across the country to New York for work, while Ben is stuck in LA.

And on top of all that, Xander's poisonous ex turns up at his going away party...

Will Ben and Xander be able to make sure their love sticks, even from opposite sides of a continent?

***
Learn the Rules contains the first five parts of the Rough Love series. Join Ben and Xander in their continuing odyssey of self-discovery, experimentation, and steamy fun as they work out the kinks together. This is just the beginning of their wild - and sometimes dark - ride, but never fear: these two will get their HEA. It'll just take them some time to figure out what that happy ending looks like for them...

Rough Love can be rough. Please proceed with caution if you have any triggers.