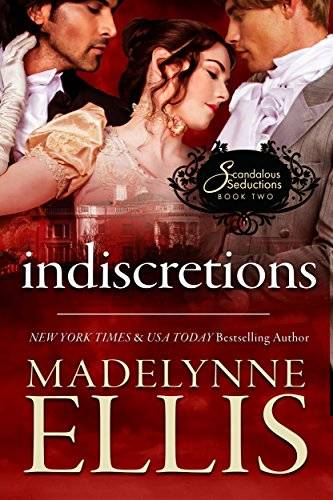 When you have two lovers, life is never simple.

The path of true love doesn’t run smoothly in the second entry in the riveting Scandalous Seduction series from bestselling author Madelynne Ellis.

Viscount Lucerne Marlinscar is caught in the middle of a constant tug o’ war between the decadent Marquis of Pennerley, and seductive heiress, Annabella Rushdale. All three are embroiled in a scandalous and highly volatile ménage a trois. Thus, Lucerne is careful never to favour one of his lovers over the other. Although, considering the effort Vaughan and Bella put into tormenting one another, Lucerne's beginning to wonder if it’s not he who’s the outsider in their relationship. What’s a considerate lover to do?

When Lucerne calls time-out for the night, can petty jealousies be cast aside for the bonds between them to be forged anew?

Indiscretions is a Regency-set romance novella with a high heat including M/F, M/M and M/M/F interactions. Expect ribald language, diabolical behaviour, and extreme decadence. You are advised to keep the smelling salts at hand.

Don’t miss any of the enthralling Scandalous Seductions series:A GENTLEMAN’S WAGER | INDISCRETIONS | PHANTASMAGORIA | THREE TIMES THE SCANDAL | HER HUSBAND’S LOVER | THE GHOST OF CHRISTMAS PAST | THE SERPENT’S KISS