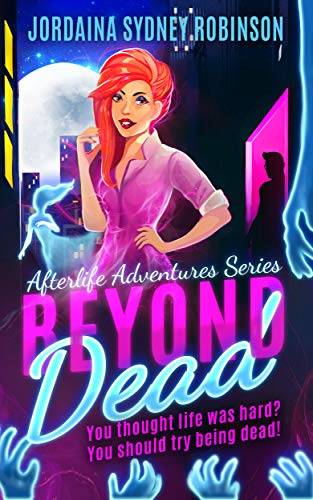 ****Currently being adapted for TV ****Bridget Sway is newly dead. And confused.Instead of cloud cars and harp-playing cherubs, the afterlife is working a full-time job that doesn’t pay and a heinous communal living situation with housemates who have no concept of privacy or personal space. As if that wasn’t bad enough, on her first day at work Bridget finds a dead ghost stuffed in her locker.With the afterlife police looking to pin the murder on Bridget, her new best friend and ex-PI, Sabrina, suggests they solve the murder themselves. But with a handsome parole officer watching her every move and the afterlife police dogging her every step, solving the murder is easier than it sounds.
If you like sassy heroines who break all the rules, laugh out loud humour and whodunnits that keep you guessing until the very end, then tag along with Bridget Sway on her afterlife adventures.
Afterlife Adventures Series:#1 Beyond Dead
#2 Dead and Buried (formerly Deader Still)#3 A Little More Dead#4 Deader Still (formerly Dead and Buried)#5 Utterly Dead#6 Dead Completely#7 Unexpectedly Dead
In the same universe:Things Go Bump in the Night Series:#1 Aurora North and the Vampire Vixens#2 Aurora North and the Maison de la Mort
Comedy Amateur Sleuth Mysteries Humorous Dark Comedy